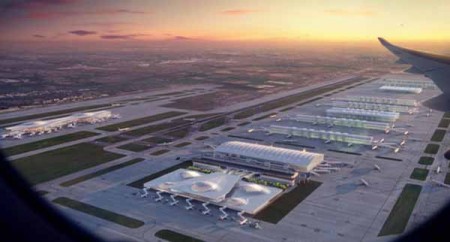 Heathrow is currently the largest hub airport in Europe but new research shows it will drop to second bottom by 2030 without expansion
Expansion would reverse that decline – delivering £16bn in private investment, shoring up the economy and enabling the UK to compete with its European and global hub counterparts to help create a strong future outside Europe
Research comes as two thirds of MPs agree Heathrow expansion will strengthen Britain’s economy
Heathrow expansion would put Britain on the front foot, enabling British business to compete with its global hub counterparts and stopping the UK from slipping to the bottom of the European league table of hub airports, according to Heathrow CEO John Holland Kaye at speech at the National Infrastructure forum today.
For 350 years, Britain benefitted from being home to the world's largest port or airport, before losing its crown to Dubai in 2015.  It was hailed by the middle Eastern hub as an ‘historic milestone’ towards making Dubai ‘a global centre of aviation’. Yet despite its capacity constraints, Heathrow has continued to enjoy higher passenger numbers than Istanbul, Charles de Gaulle, Frankfurt, Amsterdam and Madrid.
New research from Frontier Economics shows how expansion is vital to retain that competitive advantage. The UK is set to lose its crown as having the biggest hub airport in Europe to France by around 2020, followed by Istanbul in 2022, Frankfurt in 2025 and Amsterdam by 2028.  Without expansion, by 2030, it will only come ahead of Madrid in terms of overall passenger numbers. And while Heathrow will remain capped at 480,000 flight movements a year, all of the other hubs will still be well short of their maximum capacity levels with room to grow above 600,000.
As the UK’s only hub airport, Heathrow is one of only five globally with connections to over 85 long haul markets. Those routes are made viable by the hub model, which sees transfer traffic pooled with direct passengers and freight to support routes which could not be sustained by local passenger demand alone. It’s the reason why Heathrow is able to sustain four times more non-EU flights than Gatwick which operates a ‘point to point’ model, meaning that it offers a unique global advantage to British businesses and entrepreneurs wishing to trade with the world.
Today’s figures highlight that with the UK voting to leave the EU, expansion must be central to any post-Brexit plan. Privately funded and ready to go, a green light would shore up investor confidence, mobilising billions of pounds in construction contracts today, whilst laying the foundations for the future of the British economy tomorrow. With 41% of MPs ranking Heathrow as the top infrastructure for spreading grown in Britain, and two thirds agreeing expansion would strengthen the British economy, a third runway would offer 40 new long-haul routes and connect exporters to growing markets in South America, Asia and Africa.
Speaking at the National Infrastructure Forum, Heathrow CEO John Holland-Kaye said:
“The future economic security of this country depends on Britain being an outward looking trading nation. As the UK’s gateway to global markets, Heathrow’s role is in delivering that is vital.
“Now more than ever, Britain needs to underpin its globally recognised economic strength by delivering privately funded infrastructure projects like a third runway, to protect growth and underpin investor confidence. Constraints at Heathrow risk us falling behind our European counterparts and if Heathrow falls behind, Britain falls behind. Now is the time to reinforce our place in the world and send a message that the UK is open for business.”

When I originally commented I clicked the "Notify me when new comments are added" checkbox and now each time a comment is added I get four emails with the same comment. Is there any way you can remove me from that service? Thanks! my web blog: [url=https://www.linkddl.com/site/nicolemaret.tumblr.com]best web hosting 2020[/url]

fantastic issues altogether, you just received a emblem new reader. What may you suggest about your put up [url=http://tinyurl.com/y82zanr8]cbd oil that works 2020[/url] you just made a few days in the past? Any positive?

Howdy! This blog post couldn't be written any better! Reading through this article reminds me of my previous roommate! He continually kept preaching about this. I most certainly will send this post to him. Pretty sure he'll have a good read. Thanks for sharing! my blog post cbd oil ([url=http://111.12.162.34/UserProfile/tabid/57/userId/16472560/Default.aspx]111.12.162.34[/url])

Howdy I am so glad I found your webpage, I really found you by mistake, while I was searching on Digg for something else, Nonetheless I am here now and would just like to say many thanks for a incredible post and a all round exciting blog (I also love the theme/design), I don't have time to look over it all at the moment but I have saved it and also added in your RSS feeds, so when I have time I will be back to read much more, Please do keep up the fantastic job. Feel free to surf to my webpage ... [url=https://www.google.cz/url?q=https://gforg.wordpress.com/]me g[/url]