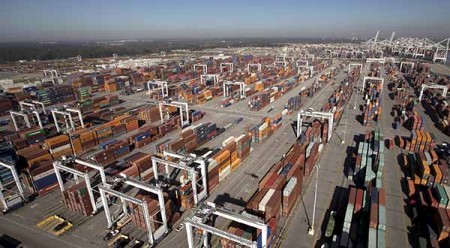 The Georgia Ports Authority is in the process of transitioning its container-handling rubber-tired gantry cranes to electric power. By using diesel power only to move between container stacks, eRTGs cut diesel use by 95 percent.

In 2012, GPA began to implement the electric rubber tired gantry crane program. By the end of August, 45 will have been transitioned from diesel to electric power or purchased with electric power capability, bringing GPA’s eRTG fleet to 30 percent of the total.

This cutting-edge technology, built to a GPA design, is the first eRTG installation of its kind at a port in North America.

“The eRTG project is unique and innovative, a model others can follow with GPA’s partners to effectively work together for a common goal to reduce energy usage and diesel emissions,” said incoming GPA Executive Director Griff Lynch.

At a U.S. Environmental Protection Agency awards ceremony held in Washington, D.C., last night, Hope Moorer, general manager of waterways and navigation programs, was on hand to personally receive the award on behalf of the GPA.

“It is an honor to be recognized in this way by the EPA,” Moorer said. “The award highlights the Georgia Ports Authority’s commitment to operating its terminals in an environmentally responsible manner.”

GPA has invested over $17.5 million to bring the 45 electric RTGs online. Over the next 10 years, the entire fleet of 169 machines will have electric power capability. This milestone project increases capacity and productivity in an environmentally responsible way, as the eRTGs use 95 percent less diesel fuel than conventional RTGs, with corresponding reduced diesel emissions for improved local air quality.

The GPA was one of seven groups or individuals recognized by the EPA for innovative work on clean air and climate projects. The 2016 Clean Air Excellence Awards are given to state, local, tribal, and private sector programs that educate the public in improving air quality or reducing harmful air pollutants or greenhouse gas emissions.

“Each of these award winners has taken real, tangible steps to improve public health in their communities by reducing air pollutants or greenhouse gases,” said Janet McCabe, acting assistant administrator for EPA’s Office of Air and Radiation. “These projects reflect the creativity and commitment of public and private sector organizations to make a difference and drive us toward a cleaner, healthier future.”

“Until this program, there had been no successful alternative allowing the transition of existing diesel-based yard equipment to electric power,” Foltz said. “In this case, we needed to think outside of the box, and put together a team that could achieve that goal.”

At full build-out, electric RTGs will cut diesel consumption by more than 3 million gallons per year, for a net savings of over $9 million – providing a positive environmental message to the community and customers. The annual reduction in CO2 will be almost 70 tons by 2026.

GPA officials said the business case for the eRTG project is reinforced when combined with lower maintenance reduction costs, bringing a total expected savings to more than $11 million per year.

The Clean Air Excellence awards program was established in 2000, and recognizes individuals that serve as pioneers in their fields, advance public understanding of air pollution and improve air quality.  Entries are judged by the EPA and the Clean Air Advisory Committee. The EPA’s McCabe formally presented the honor Tuesday at the 2016 Clean Air Excellence Awards ceremony in Washington, D.C.

This year’s winners include:

Community Action Award: Santa Barbara County Air Pollution Control District (Santa Barbara, Calif.) – Protecting Blue Whales and Blue Skies. The Santa Barbara County Air Pollution Control District established a voluntary vessel speed reduction program for ships coming to and from the Ports of Los Angeles and Long Beach, and to lower the risk of ship strikes on endangered whales. By reducing ships down to 12 knots, they reduced more than 500 metric tons of greenhouse gas emissions, as well as 12 tons of ozone-forming nitrogen oxide emissions, and no whales were hit by these ships.

Education and Outreach Award: Smartpower of Washington, DC, for its work on National Grid’s Rhode Island Energy Challenge: Find Your Four!  Smartpower worked with National Grid to encourage customers across Rhode Island to ‘find four’ simple energy reductions they can undertake in their homes or businesses. Consumer knowledge on the need to reduce energy consumption and associating greenhouse gas emissions greatly increased, with 90 percent of participating homeowners taking at least one energy reduction effort, and 75 percent of participating homeowners indicating improved understanding of their energy use.

Thomas W. Zosel Individual Achievement Award: Dr. John C. Wall is receiving this award for a career spent in reducing commercial engine emissions.  Among his accomplishments, Dr. Wall was involved in the development and implementation of technology leading to near-zero levels of emission of particulate matter and nitrogen oxide from both on and off-highway heavy-duty engines.

I came to this site with the introduction of a friend around me and I was very impressed when I found your writing. I'll come back often after bookmarking! casinosite

orlistat how it works

can you take orlistat and metformin together

ivermectin rabbits [url=http://cheapstromtol.com/#]ivermectin uk buy [/url] how much does ivermectin cost if you drink grapefruit jucie when you take ivermectin