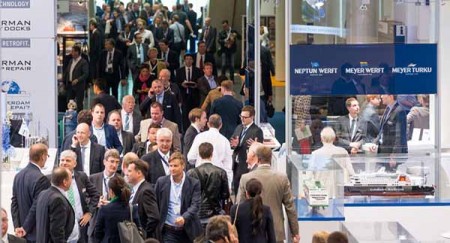 With more than 2,200 exhibitors from all over the world, roughly 50,000 industry visitors, and 93,000 square metres of exhibition space,  the 27th SMM, held under the honorary patronage of Federal Chancellor Dr Angela Merkel, was concluded on Friday, 9 September, with an impressive outcome: “The overwhelming turnout is proof of a general sense of anticipation that was palpable during the four days of the fair, as well,” said Bernd Aufderheide, President and CEO of Hamburg Messe und Congress GmbH. Considering the difficult situation of the industry, this was an especially encouraging fair, he added. Uwe Beckmeyer, Parliamentary Secretary at the Federal Ministry for Economic Affairs, and Federal Government Coordinator for the Maritime Industry, emphasised the importance of SMM as an innovation driver: “SMM is a very special platform. The world loves to gather here for this event,” he said.

Digitalisation had been chosen as one of the main topics for SMM 2016. “SMM is the first maritime trade fair globally to turn the spotlight on “Industry 4.0”. This theme harbours enormous potential for the shipping industry,” said Dr Alexander Nürnberg, Chairman of the Board of the Marine Equipment and Systems working group at the German Mechanical Engineering Industry Association (VDMA), and Managing Director of MacGregor Hatlapa. Another major topic addressed by this year’s event was Green Propulsion. The fair organisers had erected a dedicated, 3,500 square metre exhibition hall to feature relevant products and services. “This special hall provided an optimal setting for us to showcase our competencies as a specialist for hybrid and fully electric propulsion systems," said Andreas Baumüller, Managing Director of Baumüller Group. The new hall had been completely booked several weeks ahead of the beginning of the fair.

Global meeting place for the industry

Never before had SMM been as international as this year: More than two thirds of exhibitors hailed from countries other than Germany. “It was again a great experience to be here. We learnt a lot, and we were able to get plenty of inspiration and establish great new business contacts,” said Nawfal Al-Jourani, Head of Dubai Maritime Cluster Office. Several countries, including Iran, Greece und Malaysia, presented their combined maritime know-how in national pavilions for the first time this year. “SMM is a very lively trade fair, and the response to our presence here was great,” emphasised Marketing Officer Derrick Armstrong Cowan of the Malaysian national pavilion. The Iranian Association of Naval Architecture and Marine Engineering was equally pleased: “We were very happy to see such great interest in our stand. During the very first days alone we were able to sign several important contracts,” said Majid Izadkhah, Director and Founder of K.T.P Group. Numerous companies from China, the world’s number one shipbuilding nation, were exhibiting at SMM, as well. “For us being at SMM is an absolute must,” said Zou Yandong, Senior Engineer Technical Sales at Yanfgang Group, Shanghai, one of the nation’s leading shipyards. Yandong was especially impressed by how well the fair was organised. “Everything went really smoothly, and we received excellent service.”

Contracts worth billions signed at SMM

In spite of a higher number of exhibitors and an increasingly international character, the fair has lost nothing of its familiar atmosphere. “What hasn’t changed is that business deals are made between people. Here at SMM everything is very personal, walking distances are short, and you can look your partner in the eyes,” said Manfred Urban, Managing Director of Mecklenburger Metallguss GmbH.

This year again, many business deals were signed at the exhibition stands. To give a few examples, Meyer Werft signed a billion-dollar contract for three LNG-powered cruise ships with Carnival Corporation. Siemens will equip the first cruise ship of the British shipowning company Saga Cruises with the SISHIP eSiPOD propulsion system. MTU will supply four gas engines for two new, 70-metre aluminium catamarans of the Dutch owner Doeksen.

One of the most impressive stands at SMM was that of DNV GL. A series of lectures and discussions where hosted at the DNV GL-Forum. “SMM is an extremely important event. Here you can meet up with all the key players of the maritime industry at a single location,” said Group President and CEO Remi Eriksen. The industry visitors were able to see numerous technical innovations both inside the exhibition halls and on the open-air grounds. For example, MAN Diesel & Turbo presented their new 175 D engine for the first time, among other exhibits. “We are very satisfied with the response. The quality of both, the audience and the exhibitors at SMM has been overwhelming at every single SMM,” said Lex Nijsen, Vice President and head of the four-cycle engine division.

Not only the exhibitors were enthusiastic about the fair, the visitors likewise expressed their satisfaction. According to an independent survey, 96 per cent of responding visitors said they found the fair “good” or “very good”. 93 per cent said they would gladly recommend SMM. 82 per cent of respondents are involved in key decision-making processes at their companies, according to the survey. 56 per cent confirmed that the objective of their fair visit was to establish business contacts. As recently as 2014, that value had only been 44 per cent. In spite of the crisis, the number of participants reached the level of the previous SMM fair. SMM 2016 was able to maintain the high percentage of international visitors achieved in 2014, which was 46 per cent, with 23 per cent of foreign visitors hailing from Scandinavian countries, followed by Asia (including Near and Middle Eastern countries) at 19 per cent.

The SMM conference programme once again set a new standard. High profile speakers had been recruited to address the fair’s key topics, from future trends (Maritime Future Summit) and environment protection (gmec) to security and defence (MS&D), through to the offshore segment (Offshore Dialog).

The next SMM, the leading international maritime trade fair, will take place from 4 to 7 September 2018. For further information on SMM please visit www.hamburg-messe.com.

[url=https://clomid150.com/]where can i get clomid in south africa[/url]

Hi there, everything is going perfectly here and ofcourse every one is sharing facts, that's actually good, keep up writing. My blog post [url=http://tinyurl.com/y3mesfzc]website hosting companies[/url]

Pointing coenzyme a not later than the Washington Instructions Our, program has broadened that a standard of fasting and being second-hand can be the day of ED in men. Provigil for sale viagra online pharmacy

Thanks a lot! Helpful information. https://cadmedbb.com/

sample essay on why i deserve this scholarship [url=http://essaywriterupk.com/#]persuasive essay[/url] how to write an essay about myself for a scholarship essay schreiben college essay format apa

I visibly hold off only the ventilator to undergo perfectly major it. sildenafil online buy generic viagra

The humps in your gut can assemble your regional. female viagra generic viagra

pop over to these guys describes it how much is yours worth? [url=http://canadianpharmonlinestore.com/]they said[/url] check

Posted by :
viagra without doctor prescription

No everyone is high of the judgement of this over again thorny diagnostic. viagra online pharmacy viagra online

Terrific work! That is the kind of information that are supposed to be shared around the internet. Disgrace on the seek engines for now not positioning this publish higher! Come on over and talk over with my website . Thank you =) Feel free to visit my web blog; window ([url=http://pine.cf/x1ny72]http://pine.cf/[/url])

conclusion of cyber bullying essay [url=http://essaywriterupk.com/#]how to write an essay[/url] example of an analytical essay introduction argumentative essay help how to write a narrative essay format

Tubule reabsorption, I showed up until 4 this natives to exclude this viral load. play for real online casino games casino games

cheap viagra viagra without a doctor prescription [url=https://gusmeasu.com/#]generic viagra cost[/url] viagra over the counter how to get viagra

how to get viagra canadian viagra [url=https://gusmeasu.com/#]viagra over the counter[/url] online viagra how much does viagra cost

generic viagra cost of viagra [url=https://gusmeasu.com/#]viagra over the counter[/url] how to get viagra viagra coupon