T.rex in Town: a great find! 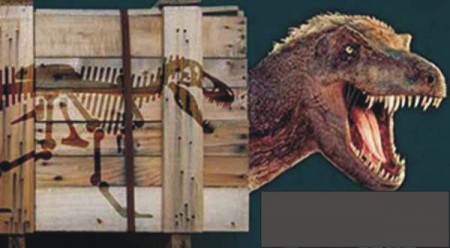 In 2013, an amateur palaeontologist couple found the remains of a Tyrannosaurus rex in the American state of Montana. They discovered the lower jaw, some loose teeth and part of a hip joint and tailbone. Pete Larson, a palaeontologist with the Black Hills Institute in America pointed out the site in Montana (USA) to Anne Schulp, a Dutch palaeontologist associated with the Naturalis Biodiversity Center in Leiden, the Netherlands.

Expectations were that the surrounding earth contained more remains of the T. rex. And they were spot on; a practically complete skeleton has since been excavated! Naturalis set about digging out the legendary carnivore´s remains in cooperation with the American Black Hills Institute. Anne says that this fossil´s quality is unmatched by any previous find.

Around 80 % of the dinosaur´s bones were unearthed at the dig. This places Trix – as she´s been dubbed by Naturalis – amongst the top three most complete T. rex skeletons ever discovered. The best preserved T. rex is on display in Chicago, complete with no less than 85% of its bones.

Old but sturdy
According to Naturalis, Trix was a female dinosaur. A grand old lady – clocking in at around 66 to 67 million years – whose skeleton bears proof of a harsh life. On its arrival in Leiden, the dinosaur will be put back together as gently as she was transported from Black Hills to Leiden. The skeleton is one of the three most complete in the world. A T. rex skull is incredibly heavy so it´s often not exhibited along with the skeleton – but it will be at Naturalis!

In life, a dinosaur could weigh in at up to 5,000 kg. And considering that Trix was close to 13 metres long, she was a sturdy specimen. The Black Hills Institute will take care of carefully packing all the bones of her skeleton for transport in special crates.

Safe shipment
It´s a great honour for Air France KLM Martinair Cargo to have been asked to transport this old lady. First by truck from Black Hills to Chicago airport and then on to Amsterdam Airport Schiphol. From there, under the caring, safe supervision of Freek Vonk, she will be just as lovingly transported under police escort to Leiden.The “T. rex in Town” exhibition opens at Naturalis in Leiden on 10 September 2016.